A tip to NYS Crime Stoppers led police to Leonard King, 23 of New Rochelle (pictured above) after a reward was posted on June 5, 2012. King was arrested by New Rochelle Police on June 6, 2012. New York State Crime Stoppers in cooperation with the New Rochelle Police Department is offering a reward of up to $2,500 for information such as the identification and whereabouts of the remaining fourth suspect responsible for the robbery of the Sunergy Gas Station located at 690 Main Street opposite Webster Avenue in New Rochelle.

On September 26, 2012 New Rochelle Police reported that two more suspects. Jonathon Bryant of Brooklyn, NY and Cory Elliot, address unknown,  pictured below were charged by New Rochelle Detectives with first degree robbery. One accomplice has yet to be charged in the robbery. Information provided to NYS Crime Stoppers regarding the recent two suspects charged was immediately brought to the attention of New Rochelle Detectives who investigated further and charged them.

On Saturday, May 12, 2012 at approximately 6:30 p.m. three black males entered the Gas Station. One of the alleged suspects brandished a black semi-automatic handgun believed to be a Glock and robberd three patrons and two attendants. An undisclosed amount of cash, between 3,000 and 10,000 in scratch-off Lottery tickets and cigarettes plus the personal property of three customers and one attendant was stolen.

Anyone with information, such as the identity and whereabouts of the remaining accomplice is asked to contact NYS Crime Stoppers at their Hotline number 1-866-313-8477(TIPS) immediately. The reward will be paid to anyone who provides information that will directly lead to the arrest and conviction of all the persons responsible for this crime. The photos seen here were taken from video surveillance cameras in the gas station and another undislosed location. 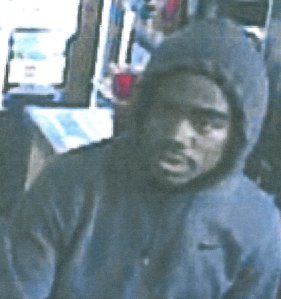 Robbery Video Link is Here Below